Listen up, because I’m about to tell you an easy way to make people think you’re in the know when it comes to stylish writing.

Take a stance on the Oxford comma.

What’s that, you ask? Look at the title of this post: it’s the second comma after the word ‘Controversy.’ In any list of three or more items, the Oxford comma is the comma placed after the second-to-last item. It got its name because if you publish with the Oxford University Press, you have to use it.

The Oxford comma can be very important because without it, your meaning can get lost. Consider this sentence:

“I keep scrapbooks of my children, Bob Dylan, and Beyonce.”

See the Oxford comma after ‘Bob Dylan’? That makes it clear that I keep three scrapbooks; two of my musical idols, and one of my children. Now try that sentence without the Oxford comma:

“I keep scrapbooks of my children, Bob Dylan and Beyonce.”

So the Oxford comma can definitely be helpful. But it is highly controversial. Opponents argue that, for most sentences, the Oxford comma simply slows down your reading without adding anything. Simple lists like “sandwiches, cakes and drinks” make perfect sense without the Oxford comma. In these cases, adding the Oxford comma could just take up space and slow down the flow of the writing.

It’s not often that grammar nerds disagree so fundamentally on a particular principle. The pro-Oxford comma camp fights for precision; the anti- camp fights for economy. Their arguments have been dubbed ‘the Oxford comma wars,’ and like many modern skirmishes, this one is fought largely through internet memes. 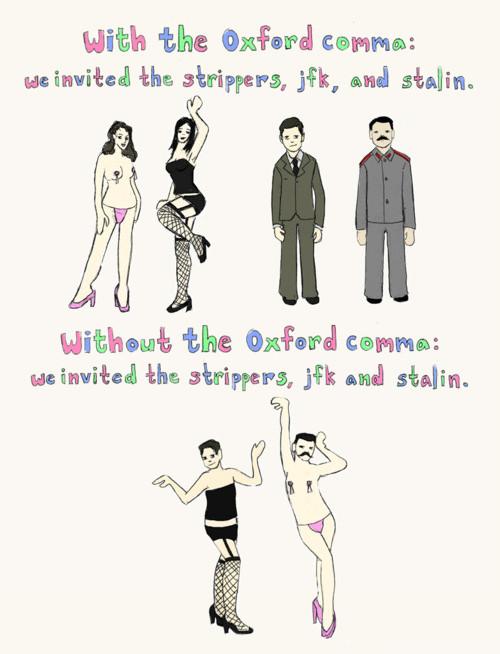 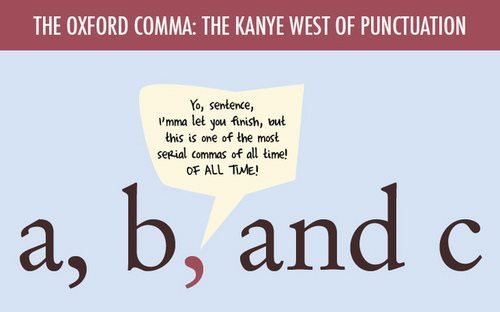 So whichever way you lean, take a stance on the Oxford comma and apply it consistently in your writing. You’ll make both friends and enemies with your decision, but at least you’ll be informed about one of the biggest, nerdiest controversies in modern writing.