When it comes to writing a thesis, the chapters get most of our attention – and so they should! They are the bulk of the thesis, and they contain the actual research. But there are other sections to think about as well, and two of them can be particularly fun to write.

The dedication and acknowledgements pages are where you can show your love and gratitude to the people who have helped you to achieve your goals. They tend to be less prescribed than other sections, so you have a little freedom to get creative in the way you express yourself! 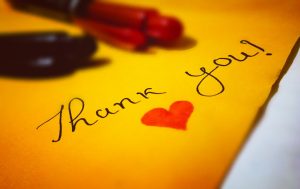 While they might seem similar, there is a difference between the dedications and the acknowledgements. The dedication, as the name suggests, allows you to dedicate your thesis to someone (or multiple people). This is quite a personal matter, and dedications are often made to family members, spouses, friends, or community groups.

The acknowledgements page, by contrast, allows you to express thanks for specific contributions, and often features people that the author knows professionally as well as personally. If a person or group helped you by giving advice, funding, mentorship, editorial assistance, or practical support, it’s a good idea to give them a shout-out in the acknowledgements. This is more than just a courtesy – it’s an important part of maintaining your relationships by formally recognising the people and organisations who have made a contribution to your work.

As an example – I dedicated my PhD thesis to several members of my family, and wrote short personal notes about their contributions. In my acknowledgements section, I thanked my supervisor, a mentor, a friend who provided technical advice during my research, and my scholarship provider.

My dedication and acknowledgements sections were fairly conventional, but that doesn’t mean yours have to be! I’ve heard of writers dedicating their thesis to their pets, their computers, and even their local barista. There have even been rumours of one acknowledgements page which included a coupon for a free beer for anyone whose name was listed!

Other scholars have been known to thank:

One enterprising paleontologist even proposed to his girlfriend via the acknowledgements section of his journal article. (She said yes, apparently.)

So if you haven’t already, have a go at drafting your dedication and acknowledgements pages. After all, it’s not often you can gush about your favourite people while still technically being productive!

One thought on “Writing Your Dedication and Acknowledgements”