Diana Albarran Gonzalez moved to New Zealand with her family because her ex-partner got a job here. She found part-time work as a lecturer, got her daughter set up in school, and enrolled in her PhD. She refined her topic – decolonising design, with a focus on indigenous artisans in Mexico and New Zealand – and started reading. Her life was busy: she was a researcher, a lecturer, and a mother.

Then, just one month into her PhD, Diana and her partner separated. Her plans were in doubt, and she needed to regroup. With no family in New Zealand, Diana didn’t have the luxury of a support network to help her through her difficult time. She took a six-month leave of absence from her doctoral research to give herself space to figure out a way forward.

Diana was not willing to give up on her goal of gaining a PhD. She saw it as a part of building her daughter’s self-esteem and independence: “it’s important for me to be a role model for her so she knows she can follow her dreams.” But she needed to make sure that she could proceed with some financial security, and without working herself to death.

During her leave of absence, Diana applied for a Vice-Chancellor’s Doctoral Scholarship. The scholarship would provide her with a stable income: “I knew that if I didn’t have that scholarship, I wouldn’t be able to continue.” When she won the scholarship, Diana was able to reduce her teaching workload and launch back into her research. 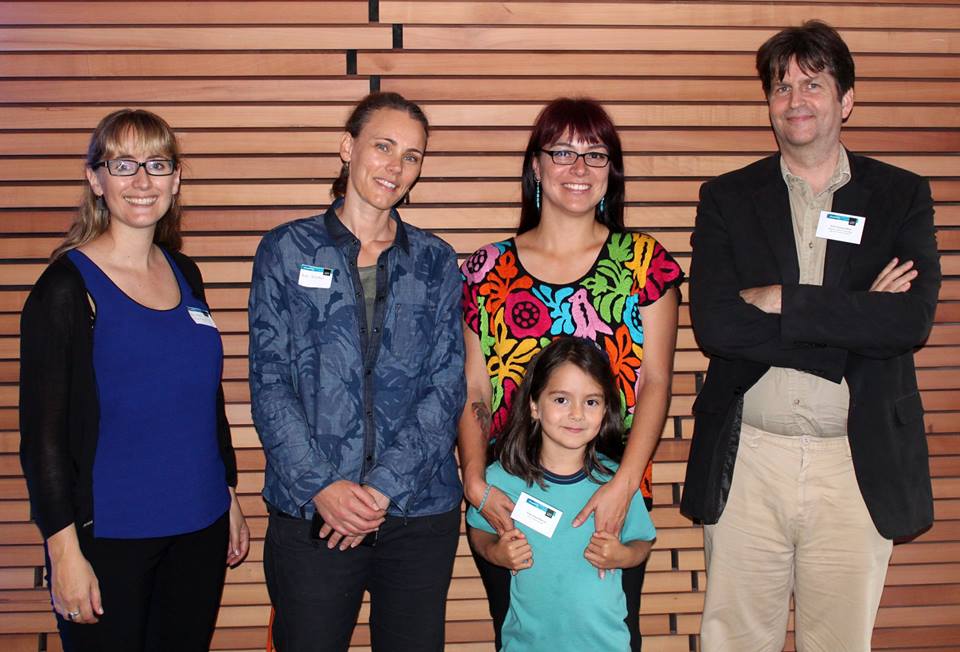 Diana (second from the right) with her daughter, co-supervisor, and supporters at the Vice-Chancellor’s Doctoral Scholar Award Ceremony

Diana and her daughter’s father came to a joint custody agreement, and they now share in their parenting duties. When she has her daughter with her, Diana avoids her heavier research tasks; instead tackling work that doesn’t require too much concentration, like downloading articles, preparing presentations, and emailing. She finds time for more demanding research tasks during playdates and after school care. She also works for a few hours after her daughter goes to bed. When Diana’s daughter is with her father, Diana uses the opportunity to work on campus.

But Diana doesn’t believe in creating a stark separation between her work and her role as a mother. Because of her research on indigenous communities, Diana knows that the sharp distinction between work and family is a Western, or colonised, invention. Taking inspiration from the indigenous communities that she studies, Diana allows for fluidity between her work and home life. Accordingly, Diana plans to include her daughter in her research by taking her on fieldwork trips to Mexico. She also plans to give cameras to her daughter and to other children in her target communities, as part of a research method called visual ethnography. “I get excited knowing that her perspective could be included in the research, and the children in the communities too.”

Fortunately, Diana’s supervisors have been supportive in helping her to balance her research and parenting. They give tips based on their own experience raising children in academia, and the idea to include her daughter in her research even came out of a conversation Diana had with one of her supervisors. As a mother, says Diana, “sometimes you feel you have to prove that you’re a professional.” But with her supervisors, “I have never felt unprofessional.”

She does, however, feel deeply immersed in her research – to the point that “it’s hard to be present fully with my daughter because it’s hard for me to disconnect.” Diana takes martial arts classes to help her switch focus: “all my stress and frustration is released… It clears my mind, so I know I’m more present with her.”

Sometimes, while she is at her martial arts class, Diana leaves her daughter with one of the other parents in her community. These people, many of whom are also new to NZ, have formed an informal support network. They help each other juggle their commitments so that, as Diana says, she won’t have to make sacrifices “just because I’m a Mum.”