When do you do your research and writing? 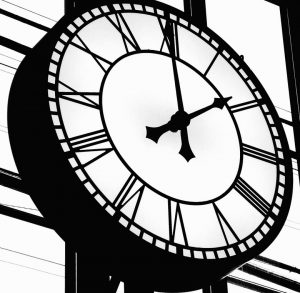 With so many research students juggling jobs, childcare, and other responsibilities, we often can’t put in a standard 9-5 day. In a recent article about the AUT security team on AUTi (our intranet site), Security Manager Rehan du Toit reported that 30 PhD students and researchers worked through the night last New Year’s Eve!

Unconventional hours can be a necessity. Fortunately, one of the small luxuries of postgrad work is that it can often be done whenever you have the time or inspiration. Many facilities are available 24/7, and research materials such as books and articles are commonly available online. If the best time for you to work is at 2am, then usually, you can.

However, the times you have available may not necessarily be the times when your brain is at its best. Although everyone is different, we all follow a roughly 24-hour cycle called a ‘circadian rhythm’. These rhythms are thought to be partly externally influenced, as our bodies react to shifts in light levels and temperature. But they are also innate.

In a Harvard study, participants were put onto a schedule which divided their week into 6 days of 28 hours, rather than 7 days of 24 hours. That meant that the participants were awake and asleep at different times on different days. Despite their altered schedules, the participants’ bodies (as measured by their body temperature and hormone levels) continued to operate on a roughly 24-hour cycle (Czeisler et al, 1999). That shows that circadian rhythms are not solely a response to external cues; there is something in us that simply needs to function on a 24-hour cycle.

Cognitive scientists have linked circadian rhythms to brain function. One review paper looked at a wide range of studies on cognitive function at different times of day. The review focused on the three main aspects of cognitive processing: attention, memory, and executive function (which includes activities such as planning and categorising information). Here’s what they found:

Here’s the good news: the review found agreement among several studies which reported that cognitive tasks involving automatic processes are not significantly impacted by circadian rhythms (Schmidt et al, 2007, p.772). So if you need to perform a basic or repetitive task like filing papers or organising notes, you can probably get away with doing it when you’re not at your best.

However, there is huge individual variation. You might be a morning person or a night owl, or neutral, depending on genetic and social factors. So your optimal time of day might not fit the average.

One really interesting study found that an individual’s non-optimal time of day might actually be a better time for certain types of problem-solving. Wieth & Zacks (2011) had participants solve problems at different times of day, depending on the participant’s individual self-reported ‘optimal’ and ‘non-optimal’ times. As you might expect, participants were able to solve analytic problems (those requiring calculation or logic) more effectively during their optimal times. But for insight problems (those requiring creative thinking), the non-optimal times were actually better. So if you need to think outside the box, you might be wise to try thinking when you otherwise wouldn’t want to!

TL/DR: the science on cognitive function at different times of day tends to show that people function better on average during daytime; but individual variation means that your own preference for particular times of day is very important too. Even during your ‘off’ times, you can still effectively perform some tasks (such as repetitive or basic tasks, or creative problem-solving).

2 thoughts on “The Science of When to Work”